The zip and hum has grown louder in recent weeks, sunlight glinting off the jewel-bodies of the honeybees as they slip in and out from under the muddy red tiles. They shoulder their way through the lavender bushes, the sky-blue borage in the vegetable patch, the strangely pale violet poppies by the rotten fence. We turn the lights off in what has become ‘their room’ when they become quiet, as the sun dips below the horizon and the air begins to cool. To make sure they sleep well.

Two days ago the windows went black, the whine of the dogs drowned out by a terrifying, bone-grating drone you could feel in your teeth. My mother looked out of the kitchen door and saw vast, writhing stalactites hanging from every available surface before lifting in an apocalyptic cloud and flying over the oak trees. We decided it was time to ask a nice man in a large veiled hat to start a gentle eviction process for those remaining. We do not kill bees.

We also no longer have a dining room wall.

The first swarm had indeed floated away over the hills, but the new Queen’s empire was vast and she wasn’t going anywhere if she could help it. The picture above is a small and recently built piece of honeycomb; they had created these soft little geometric bubbles throughout the wall and roof in a colony estimated at ‘between 30 – 50,000’ rare old English honeybees. Fifty Thousand.

As Bee Man gently began lifting their white, waxen honeycomb away, they swarmed again under the thundery clouds. The queen burst out of the jagged cutaway and a roiling tide of black and gold bodies followed her as warm rain began to pelt the flagstones, the noise was incredible. I could not see to the other end of the garden, I could barely hear what Bee Man was saying over the frantic roar above our heads. He stood in the middle of the whirlwind, one hand on his hips, a piece of dripping honeycomb in the other.

‘This is so rare!’ He shouted, grinning at us. ‘This is amazing.’

Yew and hazel branches are smoking on the fire, to stop them flowing into the chimney. Now they are congregating high up in a tree next to the old stone wall. If you hold your breath, you can hear them sing. If you stare, you can see the whole hive breathing. 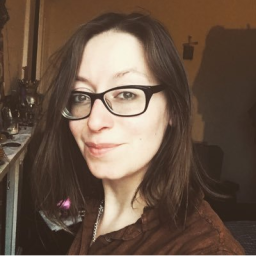